'Plaint of the Playwright

'Plaint of the Playwright

Well, this month, I'm not only in one of the Top Five, but I appear in the #1 show. (SPOILER ALERT! You should watch "Chad Vader" before you read this--it's a five minute short.)

Aaron Yonda and Matt Sloan gave me a call some time ago to be in this--they'd seen me in a couple of RASHfilms--and I jumped at the chance. I've actually been fans of theirs for a while (and somehow missed that they live in Madison until about a month after having discovered them), and was shocked when Matt actually knew who I was (he saw my production of Neil LaBute's "Bash.").

It was actually a near-profesional shoot. I've worked crew on one or two professional shoots (both as an extra and as a crew intern), and this seemed as tightly run as any of them.

The first question Sam (another Yonda/Sloan fan) asken me was, "Who's playing Chad? Matt or Aaron?"

The answer, appropriately, is "yes."

What's also funny to me is that Aaron is much taller than he seems in his films. And when he walked in, in full Vader getup, cape and all, with Courtney Collins (producer of the shoot) trailing close behind, I instinctively quickly got out of his way. That sort of sense-memory is hard-wired into my system from my nerdy childhood. 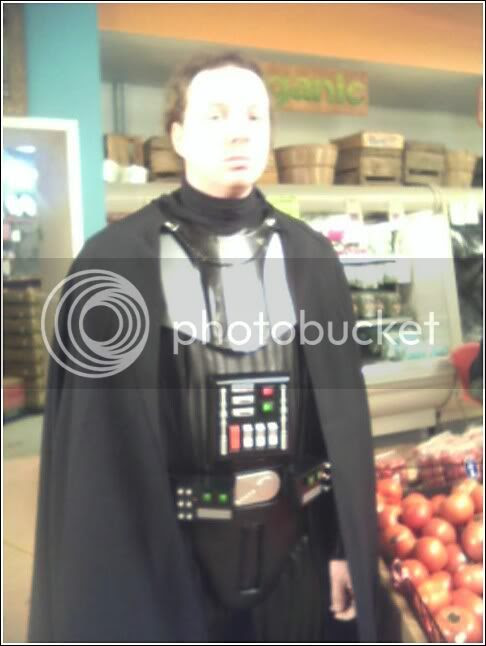 Acting for video and film is actually very intimidating--when I initially read my lines as the character of "Lloyd," I had done them one way, and Matt and Aaron told me to play with it before the shoot. When I did it for them at the shoot, Matt said, "Good--I like the changes."
I was so nervous, actually, that I honestly couldn't remember how I'd done it the first time.

The first take, Matt mentioned that I was clearly smiling a little bit. I laughed, because all I could think was, "I'm in a food co-op and Aaron Yonda's dressed like Darth Vader!!!"

Then Aaron gave me a big hug. Awwww. 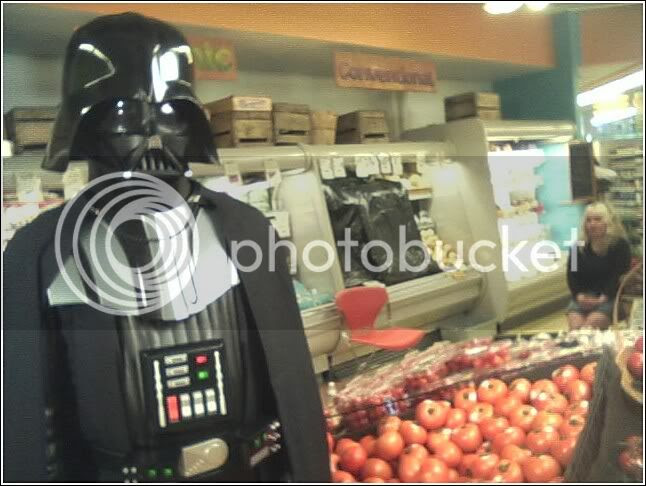 But it's different acting in front of a camera when it's not your own shoot--I think everyone who directs should do it, just to get a sense of what it's like. I hung out a little bit when I was done, just to watch. 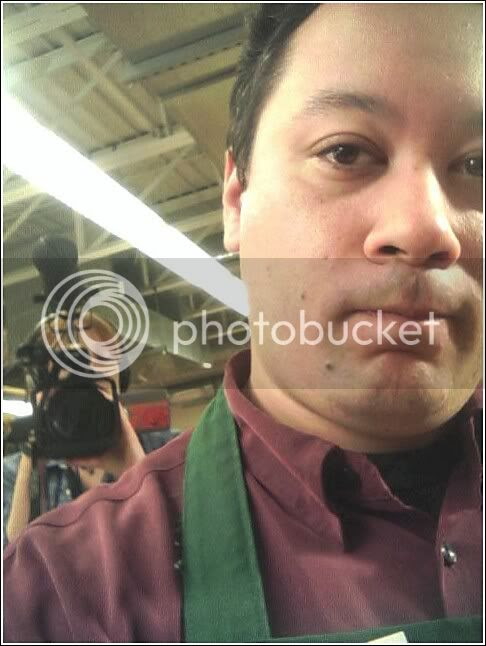 So, now it's number one on 101--which, in case you're not familiar with 101, isn't easy. Everything is voted on at a screening in L.A., so Matt and Aaron are not on their home turf. They're well-liked over there, but they don't have home-court advantage (meaning that they can't really pack the screening with buddies)--and as a result, whatever they send has got to be the best they can do. 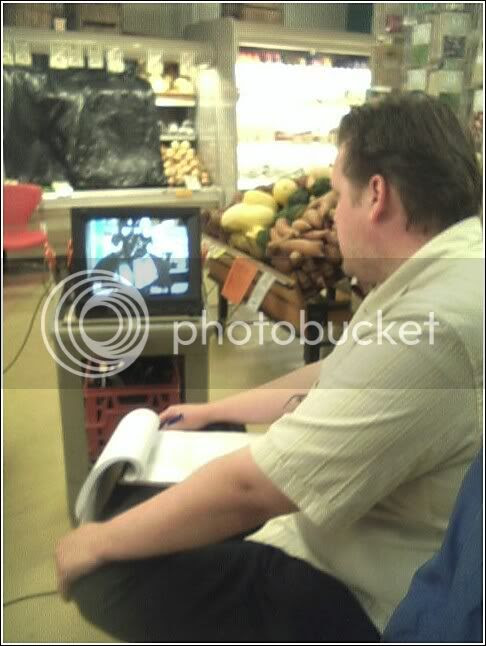 It's also fun, getting to talk to Aaron and Matt about how they do things--there's just as much done that's meticulously planned out as there is organic improvisation, usually, but this one was a very tight shoot. Not in a bad way, but, again, it felt like a professional shoot. 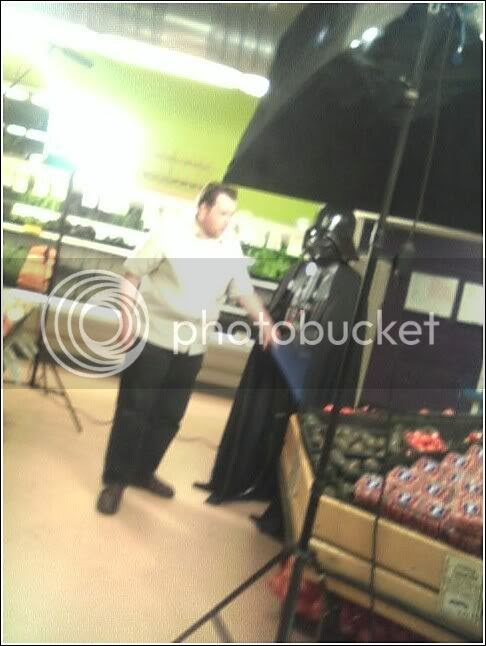 According to an email we all got from Courtney, she got to hear audience reaction over her cell phone, and the crowd apparently loved it.

From Matt Sloan himself, I was happy to read this (SPOLIER ALERT!):

There were also a lot of comments about Rob's performance as Lloyd. I believe Dan Harmon himself mentioned how good of an actor Rob was and everyone seemed to think he was a professional actor. His line "Jesus, what's your problem!" always got a big laugh -- even more than when he was lifted off of the ground.

I tend to think that the reason the reaction is so strong is because by the time my character shows up, you're totally sympathetic to Chad, and you finally see him triumph over something--anything.

I'm really happy that it's picked up--I can't wait to come back!

What a weird feeling. I'm actually having a good week.

I thought it was hilarious when I got to see it a week or so ago. I'm glad it's a big hit!

dude.
that was awesome.

It's great to see the stills you took with your cell phone!

This film is also posted on the Blame Society Productions web site, at:
http://splu.net/splufilms/chadvader1.htm

We've also got a photo album from the shoot at:
http://www.splu.net/gallery/chadvader1/index.htm

great performance! whatever changes you made worked well, awesome expressions, timing, delivery. it looks like much fun was had by all. and now by hundreds of thousands of netizens.

thanks and best wishes for your future works.

Cool vid, Rob. I actually had someone send it to me and I was like, hey, wait a minute, I *know* that guy! Good work.

I've just seen both CHAD VADER episodes...I was impressed with the quality of the production...This is easily the funniest thing i've seen on the net all year...If there was stuff like this on TV...I'd watch alot more TV...I can't wait to see episode III.

Ones to check out are below.

A Lucid Fantasy About The Afterlife.

The Straight Skinny on ILV2k.

Why this page is called "'Plaint Of The Playwright."

Venal Scene
PARABASIS
Laura Axelrod's Gasp!
Baron Von Reed vs. Evil
Papal Bull
The Life of Brian II: Has anyone seen my life?
Rants from the Chair of Pointlessness
Can We Talk About ME, For A Change?

[ LJ on the DL ]
Jen the Costuminatrix's House of Fashion
M'Lady Smites the Mean People
Baron Von Reed vs. Evil
Papal Bull
Can We Talk About ME, For A Change?
Tales from the Fountain
The Life of Brian II: Has anyone seen my life?
Rants from the Chair of Pointlessness
The Zen of Me.
Potch's OTHER Place